Over the past few years, there has been increased interest in using Botox for migraine.  Some people feel it has been an almost miraculous solution for them.  But the trials and research haven't always been convincing.  Is this treatment something you should try?

Botox is botulinum toxin, a toxin produced by bacteria.  It's actually extremely poisonous, and often is ingested as a result of not handling and cooking meat properly (botulism can be fatal).

But botulinum toxin A (Botox) has become famous for its other application - getting rid of wrinkles.  The treatment was discovered in Canada in 1987 by Jean and Alastair Carruthers, and since then brand names Botox, Dysport, and Xeomin have been used (in very small doses) to decrease wrinkles and frown lines.

But the next discovery was that patients with migraine found their attacks to be decreasing when they had Botox treatment.  Why was this happening?  Was it just a coincidence?

Since then, research has begun to try to understand why it works, and when it works, and how Botox for migraine might best be used.

How does it work?

In your body, a chemical (neurotransmitter) known as acetylcholine sends signals for muscles to contract.  Botox as a toxin binds the nerve endings, blocking the release of the chemical.  Essentially, your muscles don't get the message to contract, and so they relax.  In a proper treatment, the muscles won't contract (causing wrinkles), but will still have enough strength for normal use.

Why it may work to relieve migraine is not certain.  Could it just be that relaxing certain muscles slows the migraine chain reaction?  Actually, it's probably not so simple.  It's more likely that Botox blocks pain signals, or may even block signals that contribute to the migraine.

An article at The Migraine Trust summarizes the current research this way:  Botulinum toxin is believed to inhibit the release of peripheral nociceptive neurotransmitters, which may then have a knock-on effect on the central pain processing systems that generate migraine headaches.

Also see Botox for Migraine – how does it actually work? 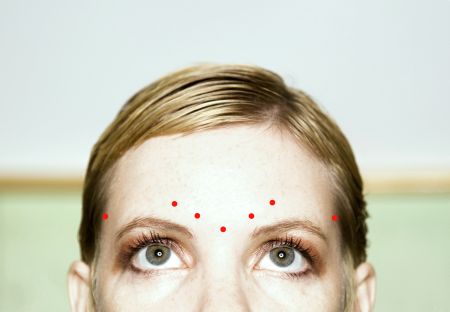 Botox injected in the forehead for migraine

So just how is Botox for migraine used?  Well, one way is through simple injections.  The treatment is given in a series of shots.  Some patients have found almost immediate relief.  But the interesting thing is that the improvement tends to last for several months.

The injections may be expensive.  Many patients need to weigh the cost against the amount of improvement they receive and the length of time the injections seem to help for.  It's important to discuss the option with your doctor and keep a headache diary.

Neither are all injections created equal.  Sometimes injections are simply done in a band-like fashion around the skull.  But as our understanding increases about what works, different approaches, more specific approaches, are being taken.

For example, Dr Jeffrey E. Janis advocates finding "peripheral trigger points", using them as a road map to use Botox for migraine.

Read more here about what Botox headache injections are like.

Dr. Janis believes that this process can go even farther.  A newer idea is that the Botox injections can find those trigger points - and then surgery can do the rest.

Instead of using a shotgun approach - simply injecting everyone the same way - some researchers believe that you can use the injections as a test.  Which muscles are triggering the migraine attacks?  If those specific muscles can be found, surgery can keep the problem from resurfacing in the future.

This treatment has some very controversial aspects.  Of course, most are skeptical that migraine can be relieved by focusing on muscles.  Though muscle problems may be a trigger, it's generally accepted that the migraine problem itself lies deep in the brain.  Muscle issues may actually be a trigger in only a few migraine sufferers.

However, even if surgery isn't a wise approach for most migraine sufferers, it could be that a trial-and-error approach with Botox may work better for some individuals.

Groups like the American Academy of Neurology are not ready to accept Botox for migraine as a major treatment.  In the spring of 2008, they suggested that Botox injections were no better than a placebo, based on the current evidence.  (Read Botox Works on Muscle Disorders But Not Migraines)  They recommended that this treatment not be suggested for people with episodic migraine and chronic tension-type headaches.

But wait - what about all these people that claim Botox has changed their lives, by relieving migraine?  Well, the fact of the matter is that the research is still in its infancy.  It seems that Botox treatments do work, for some.  And for some they work very well.

But when compared against the many other treatments out there, the evidence still needs to be built up.  In other words, there are many other things you can try, and probably should try, before you try Botox for migraine.

Some research is starting to suggest that patients with certain kinds of migraine pain may benefit most from Botox.  That would explain why the more general studies don't show the same improvements.  (Read this study on exploding vs imploding headache, for example, from 2007)

If you are interested in trying Botox, take a look at some of the latest techniques, and discuss them with your doctor.  Be sure you have a good idea what else is out there, and what the pros and cons are.

For a good overview, read How to be Safe with Botox (10 tips)

Read more about some of the earlier Botox for migraine studies here.

References and further reading:  Innovative treatment for migraines combines Botox and surgery Feb 2007; Mayo Clinic article on Migraine Treatment and Drugs June 2013; Botox Works on Muscle Disorders But Not Migraines May 2008; How Does Botox Work? WebMD 2012; Poison your migraine? Botox injections for use in migraine prevention December 2003; Drug Profiles: Botox® (botulinum toxin); How Botox Works from Bellaire Neurology; Migraine and Other Headaches by Young and Silberstein 2004; 'My surgery left me migraine free' BBC report July 2008; How does botulinum toxin work in chronic migraine? The Migraine Trust

The articles on Relieve-Migraine-Headache.com are ©2003-2018.
Every effort is made to ensure the accuracy of each article,
and to point you to further sources of information.
However, this site is for informational purposes only
and should never replace a visit to your doctor.